Last week, Channel 4 News commissioned Icebox to carve two globe ice sculptures for the televised party leaders debate to confront climate change.  The ‘melting’ ice sculptures stood either end of the panel and according to Channel 4 News Editor Ben de Pear, represented “the emergency on planet earth, not in any human form but are a visual metaphor for the Conservative and Brexit parties after their leaders declined [their] repeated invitations to attend tonight’s vital climate debate.’”

These two ice sculptures went on to become headline news and a debatable discussion point not only nationally but internationally, even reaching the front pages of the New York Times with the headline: “Ice Sculpture steals the show at the UK climate change debate”  The Daily Mash wrote about the sculpture “taking a 12-point lead in the general election polling” ahead of Boris Johnson and Nigel Farage.  Although our interest is solely on the art form of the ice sculpture and not creating a political stir, it is a great example of how our ice makes an impact not only at the event itself but far beyond.

This highlights the value when investing in a piece of our ice art.  The impact is far reaching in that impression made in an instant, the WOW factor of the skill that went into making it, the televisual and selfie moments that then live on in social media and the talking point of that lasting impression. In this case globally. Our ice sculptures not only are visually beautiful but become representations, creating powerful messages to a watchful audience. The sight of ice, melting before our eyes – transforming into a puddle of water certainly makes you think about transience and the impact the man-made world has on the natural world – in this sense, art takes on a meaning of its own.  The debate on Thursday highlighted how these two sculptures, who’s lifespan was only a few hours, have now ingrained themselves in digital history and will be viewed for years to come. 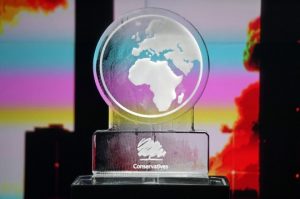 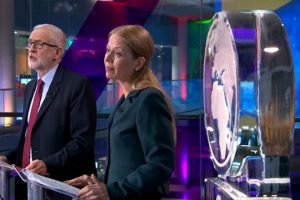